Sawyer is Unstoppable! (and 8 months old) 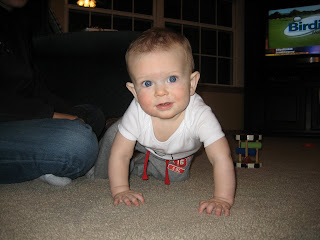 Oh my goodness! Sawyer so looks like a little boy sometimes!

So much has happened in the last month! Just over a week ago Saywer really took off, on hands and knees/toes. He has a very unique style of crawling. Sometimes he practically hops across the floor like a little frog. The first time it was obvious to me that Sawyer had finally figured out that he was a crawler was when I gave him his first little taste of blueberries. I had just blended some up for him and I wondered if he would like them. I took him a taste on a spoon and he followed me back to the kitchen. Guess they weren't too bad!

We have been using a little bit of sign with Sawyer at feeding times. We think he has been giving some of them back to us. Lately we see attempts at "more" and "all done." He also passionately shakes his head "no" when you come at him with another bite of peas. We may never win that one! Sawyer has been working on feeding himself and creating work for me in the kitchen. He loves using his sippy for water. I think we will be transitioning off of the bottle very soon. 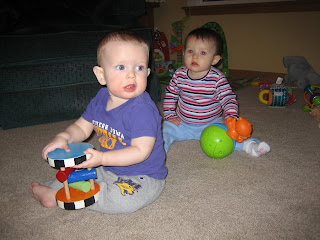 Sawyer has had fun meeting friends on the weekends although he may be a bit of a bully. Now that he can crawl he doesn't have any regard for personal space. 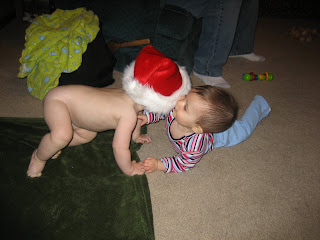 He had a raging diaper rash so he needed some air time, the hat was just for effect. It didn't matter how many times I moved Sawyer back he went right for Sydney every time! 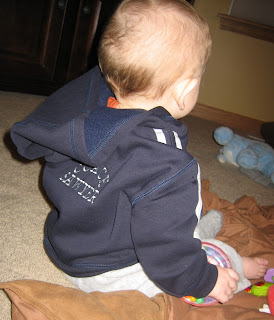 An early Christmas present from Nana and PaPaw. 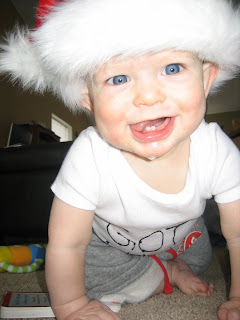 Merry Christmas!
Posted by Andrea at 9:11 AM 2 comments:

Send your own ElfYourself eCards