Sawyer found his big bag'o sand toys in the basement last week. It is one of those things I would rather leave in hiding so I don't have to deal with the aftermath. No one likes sand in their swimming suit, or their car or their eyes. But, sometimes it just needs to happen and you are glad when it does, except for sand in your eyes. Sawyer began begging last week so then I showed him where I wrote it on the calendar. Thursday, July 19th, Kent Park Beach. As it turns out it was a glorious day with milder temperatures than what we have gotten used to. Sawyer whined loudly that he didn't want to get sand on his feet before we even set foot toward the water. He cried when I tried to make him walk himself so I ended up carrying him under my arm, making a scene. Veda put sand in her mouth just as you would expect. Then we spent 3 hours wading and splashing and digging and sifting and dumping. It was quality time and I took many mental snapshots wishing I was brave enough to bring the camera onto the sandy area. Then we drove to Ghurties and Veda fell asleep with her flip-flops on her hands. I got a picture of that. :) 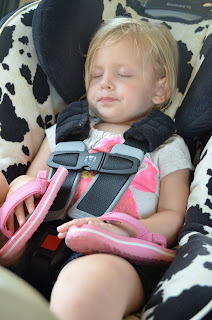 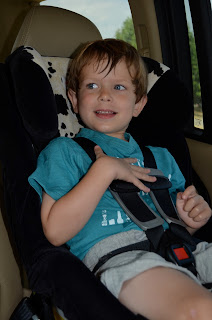