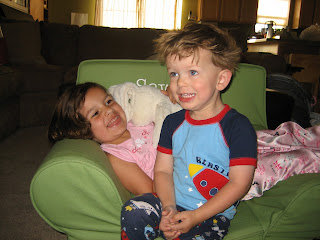 This weekend I got a wild hair and decided to let Sawyer have his cousin Leila sleep-over. This was a little selfish since I figured that if Leila was sleeping in the trundle then it would give Steve and I a break. Sawyer loves to have company at night and it is very hard to leave him in his room and actually expect him to stay there and go to sleep. As we start to get up he starts whining... "Mommy lay down..." This then escalates into a whining cry as you are leaving the room and is repeated over and over before he finally gets out of bed and follows you down the hallway. The night ends 1 of 3 ways. 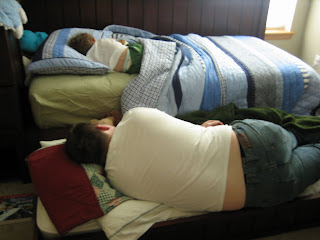 2. Sawyer is put into the crib where he cries himself to sleep because we are incredibly mean parents.

3. Either Steve or I lay as still and quietly as possible in Sawyer's room until we are absolutely certain he is so asleep he will not be awakened by our leaving... if we are wrong about this, the night ends at option 1.

So after the kids had a long day on the boat and wound up at our house, I suggested that this might be the perfect night for Leila to stay over. I knew that as long as Sawyer had company he would stay in his bed and Leila wanted to stay over so badly that they both might actually stay in there and go to sleep. I was right for the most part.

Leila loves her nigh-night blanket a whole lot. When I realized we didn't plan for nigh-night to stay over I was a little worried. Luckily Leila accepted the third really soft blanket that I offered her and snuggled up with it. The second time I was called in by Leila who told me she couldn't sleep because Sawyer would not stop talking. I totally believed her too because I think she was so scared that if she didn't go to sleep like she was told she would be driven home immediately. Next they needed water which they gladly shared and passed back and forth till it was gone. I was only called in one more time to bring a refill... I was a little nervous at this point about overnight bladder control but as it turns out there was nothing to worry about. :) The next morning they were so stinking adorable as Leila led and Sawyer followed her into the living room. Both of them were rubbing the sleep out of their eyes with smiles on their faces. I made them pose for pictures with their sleepy faces on before we sat down for breakfast. 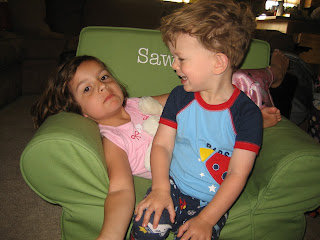 I loved hearing Leila's take on the sleep-over. She went on and on about how she went to sleep and was such a good girl so she could stay over with Sawyer. She had to go to sleep and be SO good or her mom and dad would come and get her right away and she would never be able to come over again... :) She was so good. I so love that Sawyer has Leila for a cousin! 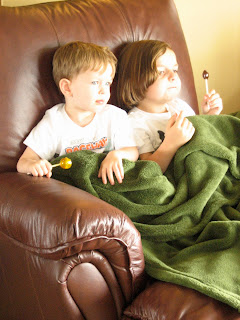