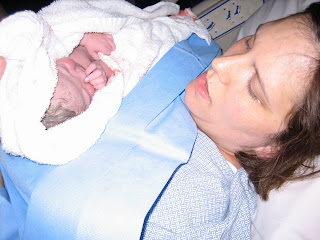 I really wish I had taken some time to write Sawyer's birth story. It is such a special time and the beginning of a new life for all involved. These are moments I just don't ever want to forget. This post is fairly detailed, though not too graffic. Never the less it may be a bit much for some tastes. If you don't care to hear/read all of the details of Veda's birthday then feel free to not read on!

On Thursday, May 13th I had an appointment with my OBGYN who offered to induce me the next day. I declined and told her I had things I needed to get done at work and that I hoped for a couple more full nights of sleep. My time was running out and she knew it too. "Well, I will see you back in a week and I guess we will see what she decides to do." She didn't want to say it but I think she knew I wouldn't make it to that appointment.

The next day was a busy day. In fact, the weeks leading up to that day had been very stressful at work. That afternoon some significant changes were made to our staff in the program so everyone remaining was nervous about how things would go for the rest of the school year. I was feeling overwhelmed with everything that needed to be done and I worried about how my students would handle my absence. I tried to put those worries aside and planned to grill hamburgers and have a relaxing evening with my family and Tricia, Cory and the girls.

As I was eating myself silly, I started to note a change in the contractions that I had been experiencing all day. Tricia had told me that eating several pieces of chocolate cake did the trick to put her into labor so I didn't bother holding back. It was the weekend and I really wanted to start my summer break. How lucky am I that I get to have a baby and a slightly extended summer break? I did, however, advise Steve to hold back a bit on the beers he was enjoying. He did not take me seriously at first when I told him I was cutting him off. Then his face turned white when I said to him, "I am serious, I think we will be having a baby tonight." I asked again if he had packed his bag for the hospital and was not surprised that he hadn't. He was stuffing items into that bag moments before we left for the hospital, classic.

I knew as I was putting Sawyer to bed I would be a mom to two when I would see him again. I felt surprisingly calm as my contractions intensified. I can not say the same for Steve who kept asking me how long he had to get things done before we left for the hospital. "How long do I have, like an hour? Do I have at least an hour? Do we need to leave right now?" At around 9:00 I called to Dani to come spend the night and take care of Sawyer until Mom and Dad could come and get him.

I sat in the passenger seat on two folded beach towels, just in case. Steve drove quickly to the hospital though I would have preferred a more slow, steady pace with care on the brakes. Never the less, the trip wasn't too bad and I worried that my contractions had slowed during the ride. I was timing them on an app I got for my IPOD Touch. That tool turned out to be awesome!

I had to have a drip of antibiotic when I arrived at the hospital due to a positive Strep B screen and we settled in for the long haul. When Sawyer was born, I was induced so I had Pitocin which made it feel impossible to try and give birth without pain medications. This time I felt fortunate to go into labor on my own and I was eager to see if I would be able to cope for long enough to experience natural childbirth. I certainly did not go into this with my mind set on how to manage pain. I knew how painful contractions could be so to be honest, I didn't believe I would make it but thought I would see anyway. If I was going to be able to manage pain I knew I would not be able to do that while laying in a bed. I made it very clear to my nurse that I needed to be able to move around and use the whirlpool tub. Steve asked me if I was getting an epidural. I responded, "Would that make you more comfortable?" That got a hearty laugh from the nurse. I can appreciate that Steve did not want to see me in pain. In the end I think going through labor with him by my side was a wonderful experience. He was perfect for me and tolerated me swatting his hand away from my back at times and giving him orders at other times.

The nurse assured me that she could get my IV started and let Steve and I walk the halls while it dripped. She monitored me every 15 minutes to keep track of baby and we wandered with breaks to lean against the wall for contractions. We stood at the nursery for awhile and looked at the newborns who were warm in incubators. One had some extra tubes and monitors. I didn't need to see that. Even though I knew I was only hours away from holding my new baby it was totally surreal to look at all of those newborns and try to make that connection. I just couldn't believe it and almost wanted to stand there looking in the window until I did.

Eventually I looked at the drip and saw that there was very little left and we made our way back to our room for next steps. I was relieved that I could get into the whirlpool tub and was totally hanging in there with the contractions, it was feeling fairly manageable. If it wouldn't get worse than that, I could handle it. Steve was ready to settle in for a little nap since it was closing in on midnight. I thought that would be fine until the nurse gave him a job timing my contractions at the tub-side. What a God-send the whirlpool tub is! Seriously, a wonderful invention. Steve and I chatted and he timed each contraction carefully with the IPOD and kept me informed about my progress. He would tell me how much longer I had in the contractions and I think he loved that he could really help me cope. He will never know how much it meant to have him help me through labor. I came through one particular contraction and shared with him that I thought the baby's name was Veda, I just had a feeling that was supposed to be her name. I prepared to ignore the list of names we brought to the hospital.

A nurse came in and monitored the baby with a doppler and told me that when I felt like getting out of the tub they would put me on a monitor for about 30 minutes before having the doctor come and check my progress. I never wanted to get out of the tub! Was she crazy? I stayed in for awhile longer, planning how I would time my exit since the contractions were now about 3 minutes apart. Finally, I decided that the only way of finding out how far we had come would be to get out so I could be checked by the doctor.

Soon, I recalled why I hated being glued to the bed during my labor for Sawyer. It is the worst to feel like a prisoner in a bed! I held onto the rails at the side of the bed and experienced some very intense contractions. This was the worst time for both Steve and I, I am sure. There was nothing he could do, even though he tried. I started to feel like I might throw up with another contraction and Steve went after the nurse to prepare for such an incident. I was losing my nerve. It wasn't worth continuing this for much longer; I was going to need an epidural. I was okay with that but wanted to know how close I was, how much longer would I need to endure this? The nurse returned and told Steve to put the rail down on the side of the bed. I thought I might cry because holding that rail was helping me maintain one tiny shred of security. I didn't let go as it was lowered and Steve held the bucket for me. No vomit... thank goodness.

The nurse brought in Dr. Adam and she asked me if I was wanting medication for nausea? I told her I didn't know but I just worried that I would throw up. She decided to go ahead and check my progress and proudly told me that I had done great and was almost complete... "You are going to do this without an epidural!" she said.

I was nearly in tears and responded, "I am?!" No turning back! She broke my water. Couldn't get out of it if I wanted to. Oh geez, now comes the scary part... I tore pretty badly with Sawyer so I wasn't looking forward to pushing without any medication. You do what you have to do when it comes down to it. I had no idea how true that statement would be until my next contraction.

I had the strangest sensation I have ever experienced in my life when I suddenly had the urge to push. I wasn't expecting that to happen so quickly and nothing can prepare you for that feeling. I was still on my side and with the onset of the contraction I freaked as I yelled, "I need to push! I am pushing!" Steve tells me that I had an expression on my face he had never seen before. My eyes were the size of planets! I guess that is what sheer panic looks like. Dr. Adam and the nurse rushed back into the room and quickly tore the bottom of the bed away to set up for Veda's birth. If you had told me how quickly the next 5-10 minutes would pass I would have never believed you. I pushed for a very short time before Veda made her appearance. She was born at 1:33 AM on May 15th, weighing in at 7 lbs 2 oz and 20 inches long. She looks a lot like her big brother!

Here we are! I am sharing the news with my Dad and Mom in this picture.

Great birth story, I am happy to see you back in the blogisphere! :)

Thanks for sharing your story. What a special time - and baby. It's helpful to read birth stories as Sara's due date approaches. Be well.